C-Train is the light rail network serving the Calgary city in Alberta province, Canada. It is the busiest light rail systems of North America. Every day, it carries around 333, 800 passengers. It is the most convenient public transit system for people who work in Downtown Calgary.

Calgary C-Train system currently consists of two lines and 45 stations. Total track length is nearly 60 km. Calgary Transit, a mass transit service provider owned by the City of Calgary is given the responsibility to operate the system. It is the first mass transport system in Canada that uses electricity generated solely from wind power.

Calgary is an important as well as an overcrowded city of Canada. Regular road transport didn’t have the capacity to carry all of the people who commute to the downtown area every day. Again, in the downtown area, it was increasingly problematic to provide parking lots to the growing number of cars. This called for an alternative high capacity transport system.

All of these lines were extended later on to achieve their current lengths. 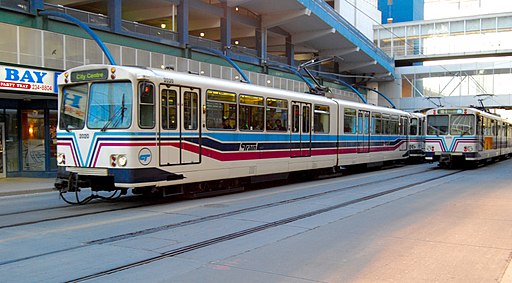 Trains of C-Train network run from 4 AM till 1 AM every day. The timing may slightly vary depending on the particular line and route. The headway is 10 minutes.

Get the timetable of C-Train here.

The two lines are respectively called Route 201 – Red Line and Route 202 – Blue Line. The routes are mostly differentiated except for a 2 km long section near the downtown area, called downtown transit mall. Towards the south of the city C-Train and Canadian Pacific Railway share the route and it is possible to switch between the two networks. The routes are partly underground, partly elevated.

The stations were originally built for 3-car trains. Currently, 4-car LRT trains are being introduced in the system in a phase wise manner.

It connects the northwestern and southern parts of the city. It is a 33 km long line and has 20 stations along it. The line has two legs, namely, the Northwest leg and the South leg joined by the downtown transit mall.

It connects the Northeastern and Western parts of the city. It also has two legs joined by the downtown transit mall. This route is 25.7 km long and has 16 stations along it.

The system is being constantly expanded.

The fare calculation of C-Train is similar to all other Calgary Transit operated modes of transport. Rides within the downtown area are free. It is called the 7th Avenue Fare Free Zone. For all other parts of the city, you can either purchase a single ticket or a booklet of 10 tickets. A single ticket for an adult costs $3.15 and for a minor costs $2.10. Children aged 5 or below travel free of cost. High-school students with ID card also get the same discount as the minors.

There are also passes available. Passes are of two types: Day pass and Monthly pass. Day pass for an adult costs $ 9.50 and for a minor costs $ 6.75. A monthly pass costs $ 99 and $ 65 respectively. Besides, special passes are there for travelling to and from the Calgary International Airport, for senior citizens and pet animals.

Tickets can be purchased either from ticket vending machines or online from company’s website.

Get detail information on the fare system here.

Following are the services that Calgary Transit makes available to you.

Before using the service, know about C-Train rules.

Following tips may help you organize your journey better.