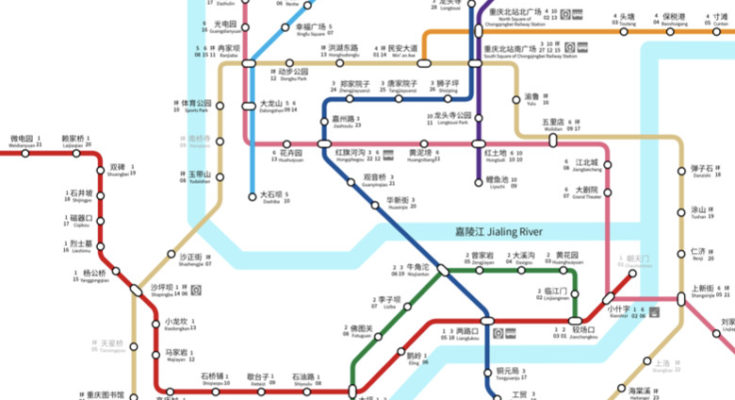 The Chongqing Rail Transit is the metro system that operates in the chinese city with the very same name. The system is commonly known as CRT. As funds for its construction came from Japanese Banks some of the technology used is also imported.

Rails are built along a very irregular surface, crossing hills and rivers. The depth of the stations made the construction of an all heavy rail tunnel system impractical. So some rails had to be heavy regular rails and others heavy capacity monorails. The monorail technology provides efficient climbing capabilities and can carry more weight than conventional rails.

Total track length of the metro is 168 kilometers (2015). The system connects 92 stations en route. The average daily ridership of this metro system was 1.1 million passengers in 2014. A monorail can transport 32,000 passengers per hour per direction

The metro system currently has four lines. The Chongqing Rail Transit (Group) Limited Co is planning to expand the total coverage. Individual lines of Chongqing metro can be identified by its color.

The ticket fare in Chongqing metro system is based on the distance traveled. It usually ranges between 2 to 10 Yuan.

Single tickets can be purchased at any station in Chongqing metro. These tickets are valid only on the day of purchase for a single use. A single journey is within 180 minutes of travel. If a journey using a single ticket exceeds this time limit, the passenger will be charged with the highest one-way ticket fare.

The fare is calculated as below:

Souvenir tickets are specially designed tickets that are made available to the passengers on public holidays and festivals. Depends on different themes, the validity of this ticket changes. And, the fare is decided based on the number of days the activity is put up for.

Travelers can use this ticket to ride the subway for a pre-determined time. However, these tickets do have a validity period attached to it. The fare depends on the distance traveled.

The Chongqing metro provides passengers a facility to make pay fare in advance and use a ticket card to commute without hassle. With a Chongqing Public Transportation Card, daily commuters can avail a discount of 10% on the subway fares. These cards can also be used on the city buses as well.

Passengers using Chongqing metro can purchase group tickets to avail further discounts on the total fare. It is a good option for a group of any number of passengers.

Park and ride facilities are available for passengers in some of the metro stations, not all.

Rules and Tips for passengers

Smoking, drinking and eating are prohibited. Inflammable substances are also not allowed inside the metro. Passengers can get their small pets along provided the pets are inside carriers. The metro also has provision for transporting bicycles.

Chongqing metro system has a very complex topography running through difficult terrains of the city. One curious fact is that the line 2 monorail at one stage is passing through a building. The rail was constructed in this way in order not to demolish homes. The ingenious planners also made room for a small station inside the building. 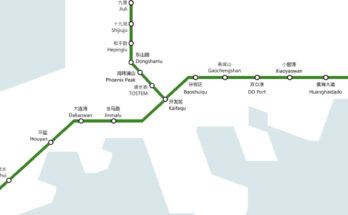