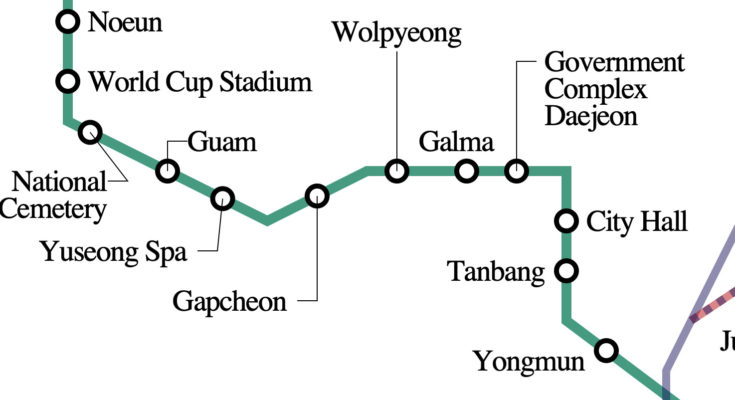 Daejeon Metro is the rapid transit subway facility serving the South Korean city Daejeon. Currently, the system includes a single line connecting 22 stations along a 22.6 km long track. Daejeon Metropolitan Express Transit Corporation is in charge of operating the line. Daily, around 79500 passengers commute through this subway system. After Gwangju, Daegu, Busan, Incheon and Seoul, this is the sixth subway transport system in South Korea.

With a population of 1.5 million, Daejeon is South Korea’s fifth-largest metropolitan area. It is one of the administrative, educational and economic centers of the country. The need for a rapid metro system is such a hub city was inevitable.

The city authority had planned a 5-line metro system with the first line to be operational as early as 2002 to cover the traffic pressure during the Soccer World Cup. However, due to the lack of funds, the project got slowed down and was completed in 2006. The first line started operation from 16th March 2006 with a 12.4 km long track from Panam to Government complex. On 17th April 2007, a further section of 10.4 km was added. It connected Government Complex to Banseok.

The construction of Line 2 was supposed to start in 2008 but was postponed.

The Subway is open from 5:30 AM in the morning to the midnight. Trains are available every 8 or 10 minutes. In busy hours, trains run at 4 to 5 minutes intervals. On holidays and weekends, you’ll get lesser number of trains.

Line 1 runs from Panam in the north-western part of the city to Banseok in the eastern corner. It includes the Daejeon Station which is near to the old city center. Here passengers can interchange to KTX and Korail. In addition, it also covers most modern and newly developed parts of the city, the city hall and other important government buildings. A complete travel on this line takes around 40 minutes.

The line is well-connected with bus routes and each station has a nearby bus stop. Main stations on this line are:

Daejeon city authority plans to begin construction of Line 2 soon. It includes both grounds level and above ground stations. The route plan is expected to come out by 2015 and test operation is planned to start in 2018. If this schedule is actually implemented, we should see Line 2 fully in operation since 2021.

Though the authority hasn’t publicly disclosed the technological specifics of the line and the trains, rumor is that the trains are going to be magnetic levitation type similar to Japanese HSST.

Line 2 is conceived as a 30.5 km long ring-shaped line which intersects Line 1 several times. Line 3 will have a 24 km long track and will connect the north-south part of the city. Line 4 is going to be a relatively shorter track (9.7 km). It will run parallel to Line 3 but further towards the west. Line 5 will be a 15.2 km long line connecting the east-west sides of the city. In total, the whole network is planned to have a 102 km long track.

The metro fare is determined on the basis of sections traveled, the age of the traveler and the type of tickets. Section 1 fare category applies when a rider travels up to 10 km from his departure station. In case he travels more, section 2 price is charged.

There are three types of ticketing options: Traffic card, Token and 3S card. However, traffic card seems to be the cheapest alternative among the three. Section 1 fare for an adult (19-64 years) with traffic card is 1250 won, with a token is 1400 won and with 3S card is 1400 won. The amounts change to 1350 won, 1500 won and 1500 won respectively when a passenger travels beyond 10 km.

Youths (13-18 years) and children (6-12 years) pay a portion of adult fare depending on their ticket type. People aged 65 and above, children under age 6, veterans and disabled persons are allowed free ride. If a group of more than 20 children is traveling with an adult guardian, the traffic card rate applies.

Get the details of fare and discounts from Fare Information page.

Daejeon Metro authority is committed to offering every passenger an enjoyable ride and that’s why they make available multiple services on the stations and also on the train.

To ensure smooth running of the metro system, the authority has set the following rules:

Keep the following points in mind to make the best use of Daejeon Metro service:

For details on stations, lines and interchanging possibilities, check out the Daejeon Metro Map. The only operating line is marked with color green. 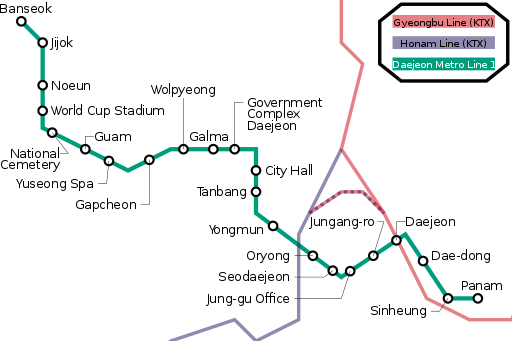