Hong Kong is a big city and one of best way to get around is by metro (Hong Kong MTR, Mass Transit Railway). It started working in 1979
and it has became the most popular public transport in Hong Kong. Almost a half of its population, about 4.2 million people,
use it everyday. There are metro stops in nearly all of the areas in Hong Kong metropolitan area.
Those who wish to travel to and from the city centre or other areas of Hong Kong should have no difficulty
finding the train to take them where they need to go as the MTR has around 84 stations located at all major places. The complete
network has 152 stations, including these 84 railway stations and 68 light rail stops.

The complete transport network is composed by heavy rail, light rail, airport express, inter-city railway service and the MTR Bus.
It’s nine urban lines, one Airport Express line to get to the Airport from downtown, one light rail system with 12 routes
and one tourist cable car system Ngong Ping 360.

At the moment there are some projected lines and stations. Following ones are already operational. 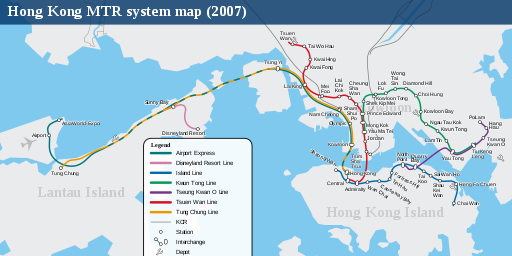 The colours of the lines are dark orange for the Tseung Kwan line, purple for the West rail line, Brown is for the Ma on Shan line. Turquoise is for the light rail and the Airport Express. Dark Blue for the island lines, and light blue the East Rail Line.Green is for the Kwaung tong line. Light orange is for the Tung Chun line.

MTR uses an easy single fare system. The fares range from 4 Hong Kong dollars to 26 dollars depending on where they are going
in the city and whether a transfer is required.
You can buy single fare cards at most of the metro stations. There are reduced fare tickets for both children and the elderly.
The tickets for a single fare connection depends on how far the individual is choosing to go in the system.

An interesting fact for tourists is that The new West line system will have some of the deepest tunnels in the subway system.