Serving Ottawa, the capital of Canada, O-Train has gained immense popularity. It is a light rail system included in Ottawa Rapid Transit Network. Currently, O-Train runs between Greenboro and Bayview.

Though initially conceived as a means of local mass transport the system enjoys a status of a mainline railway. For its efficient service, it has received many awards like FCM-CH2M Hill Sustainable Community Award, CUTA’s Corporate Innovation Award etc.

At this moment, only one line, namely, the Trillium Line is operational. The complete track length is 5 miles and there are 5 stations along it. OC Transpo is responsible for operating the line and the stations. As per 2011 data, every day, around 12000 passengers use the system.

O-Train started operation on 15th October 2001. It was developed as an alternative to the bus system already operating in the city. The Trillium Line was built spending only $ 21 million. It used the already built track of the Canadian Pacific Railway. But the stations were all newly constructed. Initially, the frequency of trains was every 15 minutes. In 2015, it was increased to every 12 minutes.

Canada being an extensively French spoken country, the system has got a name that is meaningful in English as well as in French. Acart Communications, an advertising firm working with OC Transpo has suggested the name. Initially, the Trillium Line was named O-Train. But with the construction of a second line, the name now applies to the complete system and the two lines got their individual names.

The O-Train system is open from 6 in the morning till the midnight. On Saturdays, the first train starts at around 6:30 AM and on Sundays and other holidays at around 7: 30 AM. On Sundays, the system closes after 11 in the night. Trains have 12 minutes headway on all days.

Get the O-Train timetable here. 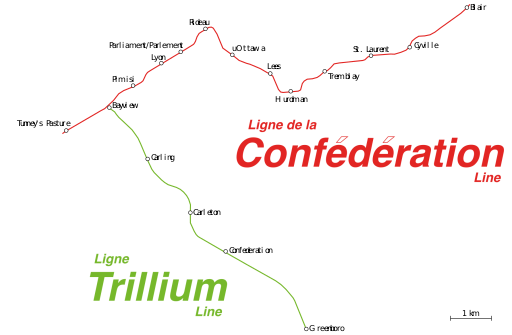 The Trillium Line is a north-south line and is diesel-powered. The track is completely separated from other road traffic but is also used by other trains. Low floor, multiple car trains run on the track. The current stretch includes the following 5 stations. All of them are built at the ground level. Both the terminus stations have transit ways.

It is the currents southern terminus of the system. A nearby attraction is the South Keys Shopping Center. From this station, you can make transfers to rapid transit route 99 and others.

The station is named after the Carleton University. It has two tracks and two platforms to facilitate trains’ crossing. It is located near the Rideau River.

The station is located near the junction of Preston Street and Carling Avenue. It gives you easy access to the Rideau Canal skating rink, Booth Street Complex, Sir John Carling Building, Dow’s Lake and to Canadian Tulip Festival. Though the entry point is at the surface level, the tracks and the platform are all one level down.

It is also an important transfer station. This station is located near downtown Ottawa. The Parliament Building is visible from this station. Ottawa’s tallest office tower, Tom Brown Arena are all located in the nearby.

In 2006, the city council decided to expand the system by replacing the diesel service with an electric one. However, it was later cancelled. Currently, a second line, called the Confederation Line is being constructed. It is an east-west line with 13 stations and 7.8 miles long track. It should start operation in 2018. In near future, the Trillium Line may be extended to connect to Macdonald-Cartier International Airport.

For ticketing, O-Train uses the proof-of-payment system. There is no entry barrier as well as ticket checker on the stations. However, if any OC Transpo staff asks you, you are bound to show your proof of payment. You can buy the ticket from the ticket vending machines located at the stations.

There are single journey tickets, day and monthly passes and Presto e-purse. Of course, the fare is much less if you’re paying with presto card. Standard fare for an adult with Presto e-purse is $3 and on cash purchase is $3.65. A day pass costs $8.50 and a monthly pass is $105.75. Children under age 12, seniors over age 65, students pursuing full-time study get discounts on the standard fare.

Get details on price and fare here.

OC Transport corp. offers a plethora of services and facilities for the convenience of the passengers.

Make sure you obey the rules set by the authority to avoid monetary penalty and harassment.

These are few tips to ensure a better riding experience.