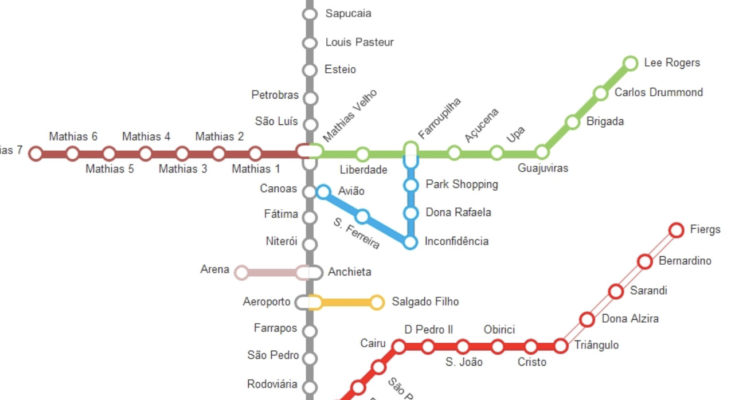 The Porto Alegre Metro in Brazil consists of a single urban rail line that stretches across the northern part of the metropolitan area of Porto Alegre. This includes several municipalities: Porto Alegre, Canoas, Sapucaia do Sul and São Leopoldo. One of the main reasons for the construction of this system was the traffic congestion on the BR-116 highway that served this area and was already saturated. Besides introducing a modern subway system, cheaper and faster to modernize the region.

After the last update (Novo Hamburgo), Trensurb line 1 has a total length of approximately 43.4 kilometers and 5 new stations were added for a total of 22. Most of the route goes ground level and only a small stretch of just over 2 kilometers is elevated. Through this route 20 trains are circulating per hour and direction. Each train has a capacity of 1081 persons, allowing a maximum of 21600 passengers per hour and direction. Line 1 became operational in March 1985 with the section between the stations of Mercado and Sapucaia. It has an average speed of 45km/h and a maximum speed of 90. More than 200,000 people use this transport daily.

Porto Alegre subway connects the city center to the airport and the long distance bus station. Trensurb connects with the 224 lines of Omnibus. With this rate the user can take a metro trip and bus with the same ticket. The metro is a good way to travel in Porto Alegre since the tourist attractions are within walking distance of the subway stations.

Porto Alegre metro is managed by the urban rail company of Porto Alegre, known as Trensurb, in conjunction with the federal government of Brazil and Rio Grande do Sul.

Without considering it as a line, there is a connection of only 2 stations and less than 1 kilometer long linking the Trensurb airport metro station to the International Airport Salgado Filho station, Terminal 1.

There is a single integrated rate of 1.70R $
You can make transfers between bus and subway.

In the map below you can see the planned metro and Aeromóvel lines:

Cycling Trensurb program. Bikes are allowed within predefined hours: Monday to Saturday in off-peak times. Weekends and holidays, all day. Only one bike per user is allowed. Bike can not be ridden at the stations. To enter the bikes to the stations an inspector should be notified to open the entrance gate. Always step in the second wagon with the bikes, never the first one.

Trensurb has available staff for people with disabilities.

There are blue seats called preferential reserved to people with disabilities, elder, pregnat women or people traveling with small children.