Subway of Philadelphia is part of the Septa (Southeastern Pennsylvania Transportation Authority), which also provides other rail transportation systems (buses, trolleys, trains) and covers Bucks, Chester, Delaware, Montgomery, and Philadelphia. The Philadelphia subway network has 4 lines (elevated, surface and underground) that connect to these transport systems to access other parts of the region.

The Subway of Philadelphia is a good way to see the city and the area for tourists, as it operates through the center of the city and is the fastest transport. By Subway of Philadelphia you can visit all the important points of interest for the tourist. The Independence National Historical Park, Liberty Bell Pavillion, Philadelphia Museum of Art, Valley Forge National Historical Park, National Constitution Center, Longwood Gardens, The Franklin Institute, Philadelphia Zoo, Mutter Museum, Please Touch Museum, Academy of Natural Sciences, Adventure Aquarium, Eastern State Penitentiary, National Museum of Jewish, American History, Love Park, Top Philly Cheesesteaks, … and many other places.

The subway of Philadelphia operates mainly in the city center and it’s 3 metro lines and a tram line.

The Broad Street Subway, known as just the Subway, BSS or Orange Line, it’s 19 km long, has 25 stations and is operated by
SEPTA. It has three train services: Express, Local and Ridge Avenue Spur.

The Subway–Surface Trolley Lines (SSL) or Green Lines (BSS) is 3,8kms long and it’s tunnel all the way. It has 9 stations and is operated by SEPTA.

The red line is the only one operated by PATCO. It’s 23,3 kms long and it has 13 stations. 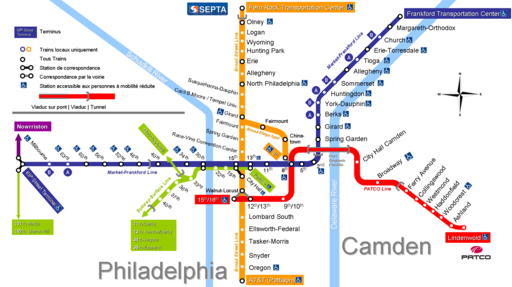 The Subway is the fastest transit system in the city of Philadelphia. There are trains from 4:36 hours to 00:30 hours every day.
The third railway line, operated by the Delaware River port Authority (PATCO Speedline) operates 24 hours a day.
Frequency is 14 to 15 minutes.

Price for a ride is $2.25 in exact cash, which includes travel by bus and trolleys or a Token that cost $1.80.
Weekly TransPass is $24. Monthly TransPass costs $91.
The fares are cheaper for people with disabilities and students. Senior citizens travel for free.

Connecting to the airport

To get to the Philadelphia International Airport, you have to use the Regional Rail Service. Airport Terminals are connected by SEPTA Connecting Services of buses,
trolleys and High Speed Metro Railway.