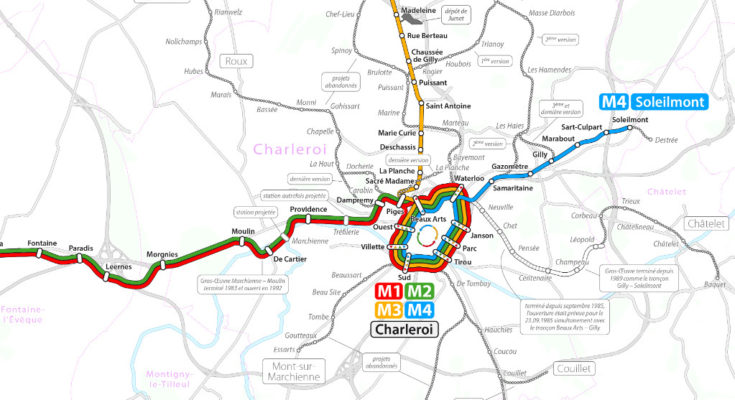 Charleroi is a french-speaking city in Belgium located 70 kilometers south of Brussels. Its population is greater than half a million inhabitants in its metropolitan area. The Charleroi Metro was previously known as Premetro Charleroi. Now is the Charleroi light rail (in French Métro léger de Charleroi). It really is a network of premetro: trams that run underground in the city center and at surface level in dedicated areas where possible and where not, by viaducts. So trains/trams streamline their travel to not get caught in traffic jams or congestions.

As of 2013, the network of Charleroi Metro consists of 48 stations, of which 24 are premetro stations and the other 24 are tram stations. They are also served by the underground. Currently Charleroi Metro is a loop line around the center of the city and two branches to the districts of Gilly and Anderlues. A third branch that goes to Chatelet is partially built but never came into service.

In the 70’s a much more extensive and ambitious network project was planned to be completed by the middle of the 90s.
The original design consisted of a central loop which connected to the 8 branches that would serve the entire city of Charleroi. Due to the high cost of implementation of the project and the estimated low volume of passengers, the construction was suspended leaving the network in a semi completed state. The city center loop was completed in 2013 by adding a section of tram to Gosselies.

The current system started its works in 1976. The ‘métro léger’ is operated by TEC.
The maximum speed in the system is 65 km/h.

The central loop of Charleroi metro is the real “metro” part the system in the sense that circulates at a different level, underground or in a dedicated via and meets the common standards of most subway systems. It has 8 stations that are common to the 4 metro lines: Sud, Villette, Ouest, Beaux-Arts, Waterloo, Janson, Parc and Tirou.

Prices in the metro are the same as in the bus network. You can use the same tickets on both systems interchangeably provided that the areas for which were bought match. Zones can be found in the map below http://www.infotec.be/Portals/0/TEC%20Charleroi/PDF/Shema_Zonal_2013.pdf

In the Charleroi Metroyou can travel Charleroi using simple tickets, multipath titles and credits or passes. Next tickets are valid for zones 1 and 2. Horizon and Horizon + (these include express services) are valid for the entire network. The price also varies depending on your age and other factors such as large families, refugees, …

Next tickets let you travel zones 1 and 2 as many times as you want during 1 hour for 2.10€. A whole day for 5 euros. These rates apply when buying the ticket on the train. If you buy it in advance the prices are a little cheaper. 1.9 and 4 euros respectively. There also exist a 3-day pass for 8 euros.

With the Horizon and Horizon + fares (including express lines) you can use the entire network for 90 minutes at 3.20 and 5.30 euros respectively. There are also discounts for buying the tickets in advance.
More info http://www.infotec.be/fr-be/acheteruntitre/titresettarifs/titresunitaires.aspx.

They are registered cards. They cost 5 euros and you can charge in tickets and passes.

They are not registered cash card. They cost 5 euros and you can charge in tickets and passes. These cards can be purchased and recharged at ESPACES TEC and l’E-SHOP. 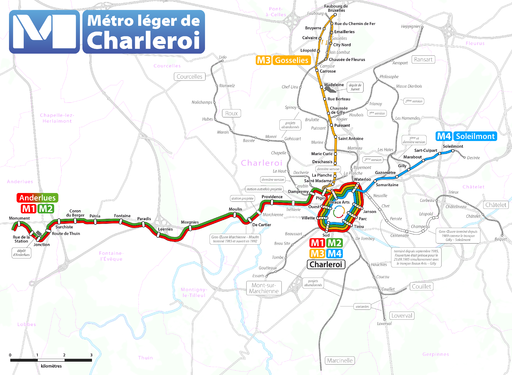 All trains hav an indicator LED with the line number and the destination station.

There are no barriers or staff to control passengers entering to the subway. Some stations have automatic ticket machines to sell the tickets. Others are inside trains. Until 2012 inspector charged directly.

The trains are equipped with a safety system that in case of overspeed warns the driver and if there is no response would stop the train automatically.

There is no direct service to the airport.