Maracaibo is one of the main cities in Venezuela. It is located in the nortwest area of the country and only Caracas, capital of the country, is a larger city.

The increasing demand for mass transit systems in Venezuela and specifically in Maracaibo, emerged strongly in last decades in order to fill the gap existing in public transportation in the country. It is a boost to the country’s modernization that coupled with the National Rail Plan, are a source of employment level that impacts on future generations growing.

Public transportation in Maracaibo is composed of several lines of buses and the Maracaibo Metro, a rapid transist system.

First phase of Maracaibo Metro Line 1 consists of 6.3 kms double track extending from east to west of the city; while 4.9 km. of track are ground level and 1.4 km are elevated viaduct. Maracaibo Metro or Metro del Sol Amado (in spanish) is a 1 line system with 6 stations. It’s under construction and some people claims that even ticket machines are not working yet.

There’s one train every 5-10 minutes during peak hour. Every 10-20 minutes rest of the day. 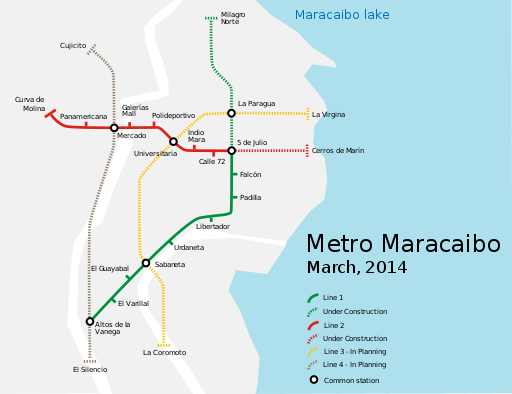 Trains regenerate energy during braking, allowing energy to be fed back to the system. People can open doors manually to save energy as there is a greate awareness about this.

La Chinita International Airport is located at the outlet Lake Maracaibo.
Minibuses, buses and taxis connect the airport to the metropolitan area of Maracaibo.
You can take a taxi as the service is reliable. The journey time to the center is 25 minutes. Or you can also go to the Lavanega Altos Station that is 4 kms from the airport and go by Metro.