Sevilla is one of the most visited cities in Spain. A tourist can visit all the attractions and locations in Sevilla by various modes of transportation such as buses, cars, bicycles and also by using the Sevilla Metro.

Although it’s a new built system, Sevilla Metro has a long history already. The construction of Sevilla Metro was delayed due to various reasons. The city is full of historical buildings, so it has become a severe problem for the designers to plan the road without harming the historical sites. Metro of Sevilla started the operations in april of 2009. The project is consisted of 4 lines, but still only one line is in operation. The Metro covers about 18 Kilometers in its line number 1. The line serves 22 stations. The Metro travels underground in town area and it comes to the land in the outskirts of the city. The Metro transports more than 14 million passengers annually. The service is earning popularity day by day with its clean and efficient service.

The line number 1 starts from Ciudad Expo to Oliver de Quintos by crossing Seville from east to west. The train stops at 22 stations. The line is subterranean in the city area and it turns aerial in the outskirts of the city. It’s divided in several zones: 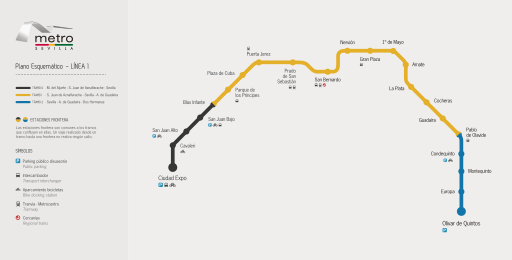 The proposed Line 2 will operate as another east to west service while covering further away from the existing Line 1. It runs between Torreblanca and Puerto Triana stations. The future traveler will be able to have the access to the Seville city center, Santa Justas Rail Station and the bus station at Plaza de Armas. The proposed line 2 will serve 13 Kilometers and it will operate 17 stations.

The Line 3 will act as alignment in north –south between Bermejales and Pino Montano. The final part of the Metro, Line 4, will cover all the lines by connecting each other.

If a person wants to reach Aljarafe Ciudad Expo suburbs in the Triana hills from Montequinto, he can use Line one. It goes through the city center of Seville and Los Remedios and then moves towards San Bernardo. These places are full of historical and public places, so that the traveler has the advantage of visiting them.

It offers rail services for Cercanias. Nervion station is located on this route and it is very close to the famous stadium Sanchez Pizjuan.

It is advisable for a tourist to purchase a prepaid card for the train charges. This card is known as “Bonometro”. This card can be refilled with 10-50 euros. It can be used by more than one person.

The Seville Underground offers its users the required information throughout the year and there are trained and friendly staff to attend all queries, suggestion and complaints. The Underground Customer service of Seville is located in Puerta Jerez station. It operates the customer service timetable from 09.00 to 14.00 and from 16.30 to 20.30

As one of the community awareness project Seville Metro offers a program for primary school children to visit Expo city underground station during their school term. The program covers about 4 hours. The students are welcomed and after the program they are taken back to the schools with the help of the service.