As part of the public transport system the city of Marseille has a subway system that uses underground technology on rubber tires.Its system is similar to the one developed by the RATP (Autonomous leasing company of Paris Transports) for the Paris and Montreal Metro.

It opened in 1977 and is a municipal public service administered and controlled by the Régie des Transports de Marseille (RTM) along with the tram and city buses.

The Marseille Metro network consists of two partially underground lines with a total length of 21.8 km, (18 of which are underground) and that run fully in the town of Marseille

Is scheduled extension of the Line M2 from the south terminal eastward to St. Loup-Pagnol with five new stations.

The two stations where you can make transfer from one line to the other are Castellane and St. Charles (Central Railway Station)

The frequency varies according to time and the seasons of the year. 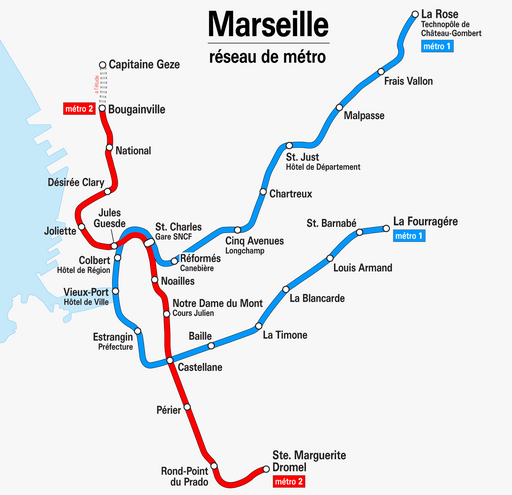 The tariff system of Marseille is called Reseau Liberte. All tickets are valid for the metro, tram and bus for an hour.

Marseille Provence Airport, also known by the name of Marseille-Marignane Airport is located on the eastern shore of the Etang de Berre. It is 27 kilometers from Marseille.

The airport has no railway connections, but buses go to the Marseille Central Train station and the TGV station (high speed) of Aix.
Both bus and taxis stops are outside the terminal, between Hall 1 and Hall 4. A shuttle service connects the airport to the St Charles Marseille train station in Marseille city center in about 25 minutes and leave every twenty minutes.The ticket price is 8.50 €. People going to another town from there can take trains to Avignon and Montpellier.