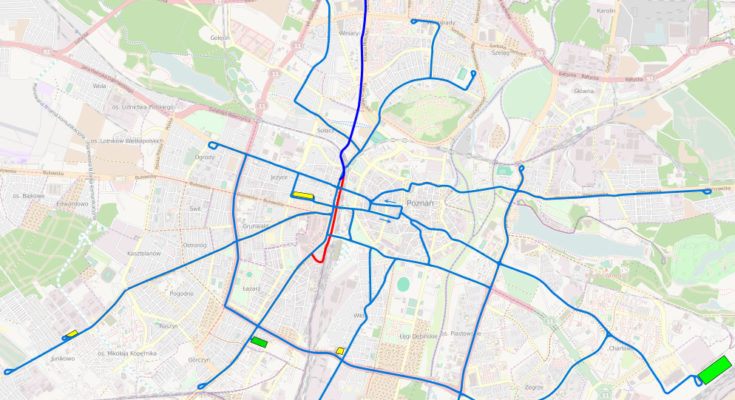 Poznan is the capital of Wielkopolska, a region of Poland that sits between Berlin and Warsaw.
It is one of the country’s oldest cities and the largest metropolitan arean in western Poland
(the 4th largest in the country).

PST and tram lines and stations

Poznański Szybki Tramwaj is the Poznań Fast Tram(PST) also known as Pestka.
It’s a light rail and tram line of about 6 kms length. Every stop in this line has a colour scheme that makes them easily
recognizable.
Poznań Fast Tram started its operation in 1997 and crosses the city from Winogrady and Piątkowo in the north
to the city centre.

Twenty two lines of tram converge in the PST Line. The whole network covers a 66 kms area.
The system run during day time, and just one line, N21, during the night.
Poznan’s tramway system opened for business in 1880 and was electrified in 1896.

* Reduced fare applies to children aged between 5 years old to almost any student under the age of 26.
PST is free for seniors avobe the age of 70 years old. There also exist discounts available for long-term tickets.

Timed ticket’s cheapest option is 3zł for only 10mins (not so cheap). In that amount of time you can reach 3 or 4 stops.
A 40-min ticket for 4.60zł is the best option unless you are going to stay in the city for a few days. Then 24hr or 48hr ticket
would be the right choice. Another option for several days visit is the Poznan City Card
for free unlimited use of the public transport system.

Tickets can be bought at the ZTM Customer Service Points, from ATMs found on most buses and trams and almost everywhere
(more than 1000 sale points: kiosks, shops, supermarkets distribute ZTM time and single-ride tickets),
and in almost every stops. Other thing to remember is that you can pay by card. If you take a big suitcase you have to buy
a ticket for that also.

Our last recommendation is to remember to validate your ticket in the kasowniks
otherwise you’ll be fined 140zł plus the cost of the ticket you didn’t validate (not purchase is not an option, really)

Poznań is divided into 3 tariff zones:

Can see the map here.

Poznań-Ławica Airport (EPPO) is 3.1 miles west from Poznań city centre. You can not get a tram to get to Poznan.
Instead there is a Scheduled express bus L every 30 minutes from the center to Poznań–Ławica Airport.
Another line, no. 59 also depart from Bałtyk bus station.

Though we love metro, we must admit that one of the best ways to see the city is by bike.
You can hire one and bike around the city visiting all the museums and cathedrals
and enjoy all the gothic architecture.