Lines 3 and 4 of the tram network and the line E of the Rotterdam metro are part of the RandstadRail network. Lines 3 and 4 running from The Hague to Zoetermeer in an old railway line and E line to Rotterdam on the old Hofpleinlijn.

The Erasmus Line, Erasmuslijn or line E: The old line NS Hofpleinlijn restructured to function as a metro in 2006. Its maximum speed is 100 km/h. It joins to the Rotterdam metro D line with an almost completely underground section.

The RandstadRail also includes 4 tram lines. Line 2 from The Hague to Leidschendam, lines 3 and 4 from The Hague to Zoetermeer and line 19 from Leidschendam to Delft. These lines are managed by HTM. Lines 2 and 19 only support RandstadRail temporarily. Line 3 from Arnold Spoelplein to Central Station and line 4 between De Uithof and Central Station are regular tram lines. Lines 2, 3 and 4 have a frequency of 10 minutes during the day from Monday to Saturday. Sundays and evenings the rate drops to 15 minutes. Line 19 always has a frequency of 15 minutes.

Lines 3 and 4 are the old lines of the suburban train Zoetermeer Stadslijn, previously managed by NS (Dutch Railways). Later this lines went on to function as a conventional train to function as a light train system and joined the tram network. 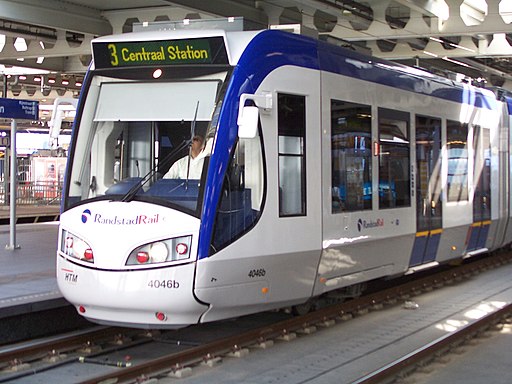