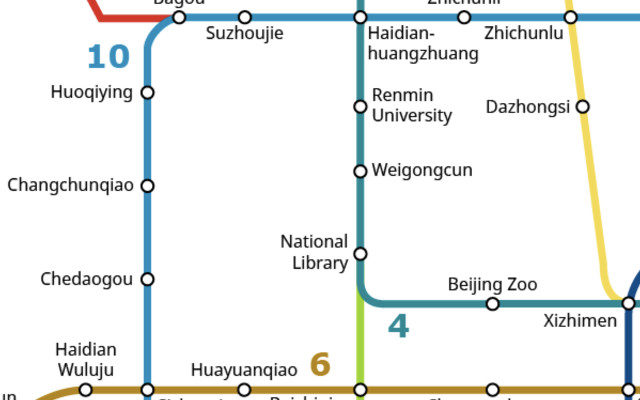 Currently has a network of 372 kms of tracks with 218 stations, which will be 560 km in 2015 to 1.000 kilometers of tracsk before the end of the decade. It first opened in 1969 and it is one of the world’s longest metros in competition with New York subway, or with Shanghay´s.

The entire network in November 2012 consists of 15 lines (372 kms of tracks) and 218 stations. They can be classified according to whether moving within the city or if circulating in the suburbs of the city.

Lines running from the city center.

Lines operating outside the urban center:

There are several new lines and extensions currently running.

From 3 to 5 minutes during peak hours and the rest of the day, between 8 to 12 minutes.The frequency depends on the line and the time of day. At peak times trains run almost straight, while at night the frequency is much lower.

There is a flat rate of RMB 2.00 (0.20€) that allows a trip with all transfers required to reach the destination.

This fee is not applicable to the Airport Express, which costs RMB 25 (about 2.5 €).

Children below 1.2 metres in height ride for free when accompanied by a paying adult.

All lines now collect fares through automatic fare collection (AFC) machines that accept single-ride tickets and the Yikatong, an integrated circuit card that can store credit for multiple rides and is accepted on nearly all urban and suburban buses. Riders can purchase tickets and add credit to Yikatong at ticket counters and vending machines in every station.

Beijing Airport is located about 27 killometers from city’s financial district. It is easily accessible by subway, bus and taxi.

-Bus: The Regular Express Bus arrives in town along three different routes: Xidan, Zhongguancun and Gongzhufen. The most popular route is the Xidan´s, which goes to the heart of Beijing, (very close to the Forbidden City).The Gongzhufen route reaches the western part of Beijing, and Zhongguancun´s reaches the northwestern district of the city.The bus stops at major hotels is in his route.
There are 9 bus lines leaving from the arrivals area in the airport and that have different stops within the metropolitan area (price: 16 RMB – 1.60 €).They circulate approximately from 07:00 am to 24:00 pm (departing from the airport) and from 05:00 am to 21:00 p.m (departing from the city). 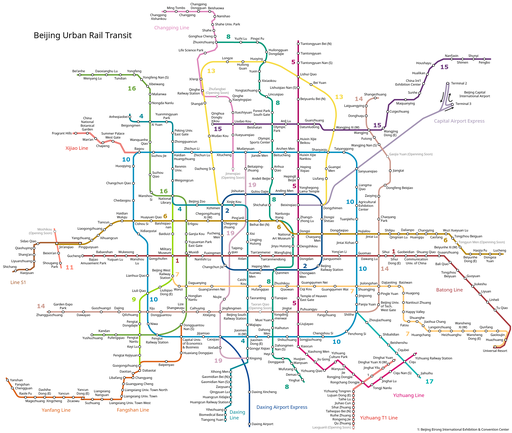