Rennes Metro is a single line rail service that runs through the city of Rennes, in Brittany (France). The system includes 15 stations, of which 13 run underground, in a 9.4 kms long track. Metro de Rennes provides a quick transportation service for the inhabitants of this city. The train gets more than 130,000 passengers every single day. 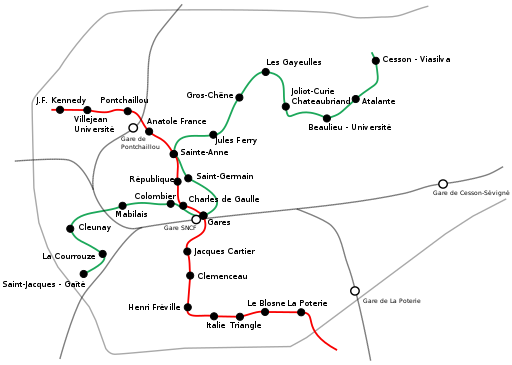 Rennes Metro was first commissioned in 2002, and was officially opened for public use that same year, on the 15th of March 2002. But the idea of a metro system that ran through the Southwestern and Northeastern axis was conceived by the city council already in 1986: the so called A-line. Work on the line A project began as early as 1992, with planning in place and obtaining the necessary environmental approval. The train system was developed upon the basis of German giants Siemen’s Transportation system VAL technology.

The A-line is a single one that runs up to 9.4 kilometers. It runs from the Northwest to the Southeast of the city, commencing at J.F Kennedy and ending at La Poterie via the Gare de Rennes (this station is served by the Gares metro station). This A-line has fifteen stations, which is inclusive of 13 underground stations.

The train system has up to 30 trains that weigh 28 tonnes & stretches up to 26 metres long individually. It can also transport as many as 170 passengers.

The A-line is maintained by STAR (which is short for the Service des Transports en Commun de l’Agglomeration Rennaise), and a company called Keolis manages it, which is a member of the SNCF. It has up to 100 staff and a control center monitors the Rennes Metro, which is located in the heart of Chantepie. The Rennes Metro is always monitored closely, and is seen by 120 cameras that constantly view the stations.

The Rennes Metro has witnessed a number of developments since its commencement such as the creation of the Korrigo card in 2006. By 2007, the city council decided that it was time to commence plans for the line B. This was as a result of increase in population and increased need for transportation. The French municipality also decided it would adopt the same VAL technology that was employed for the A-line. The next year, the line B received its approvals for planning and environment, and in 2014 the work commenced for the creation of the B-line transit system. Line-B is targeted at transporting people from the Northeast to the Southwest. It will be commissioned in 2019.

The city council had three park-and-ride lots created in January 2005, which offered as many as 900 places to motorists looking to commute. It then opened two more between 2006 and 2007, which could contain another 700 vehicles.

The train’s services commence at 05:20 am and end at 00:40 am every day except Thursday, Friday and Saturday, which has its own unique time schedule of 05:20 to 01:35. The Rennes Metro strictly follows its schedule and is always on time for its numerous stops. Passengers also have to wait about 80 seconds between the trains. It also takes up to 16 minutes to commute from one end of the line to another, with the train hitting its average speeds of 32km/h. Every station on the Rennes Metro has its own screen doors and lifts.

Frequency of trains is about 3-7 mins.

There are a number of payment options other than regular fees including your Korrigo Card. The Korrigo Card is extremely beneficial if your daily route involves using the train and you are looking for a cheaper option.

There are several tickets suited to different types of commutes.
By the 1st of March 2006, a unique card called the Korrigo card was created to supplement the ticket system. This development arose from the difficulties that commuters experienced when making use of the regular ticket system. It was therefore an alternative to the regular systems, and was made to alleviate traffic in Rennes and enhance the network of the city bus.

Standard tickets can be purchased for 1.50 Euros, which is valid for an hour after the first validation and allows you to make unlimited travels. This ticket can be used in Star lines, bus and metro, incluiding transfers. It’s not transferrable. You can purchase a carnet of 10 tickets for 13.70 Euros. There are other options through your Korrigo card.

If you happen to misplace any items on the train, do not worry. All belongings that are left behind on the train can be found I the STAR lost and found office. All items are kept by STAR till every Wednesday, then the belongings are handed over to the City of Rennes to keep in its custody. You can contact STAR on 09 70 821 800 from Monday – Friday between 7:00am-7:30pm. Also, you can contact the STAR office on Saturday between 9:30am-6:30pm. If you are still looking for your belongings past Wednesday, contact the Rennes lost and found office through 02 23 62 18 72.

An architect called Norman Foster created the design for the La Poterie, he also designed the viaducts on the line system.

The city of Rennes has over 200,000 inhabitants, but used to be the only small city in the world that boasted of its own metro system until the Lausanne Metro was opened.