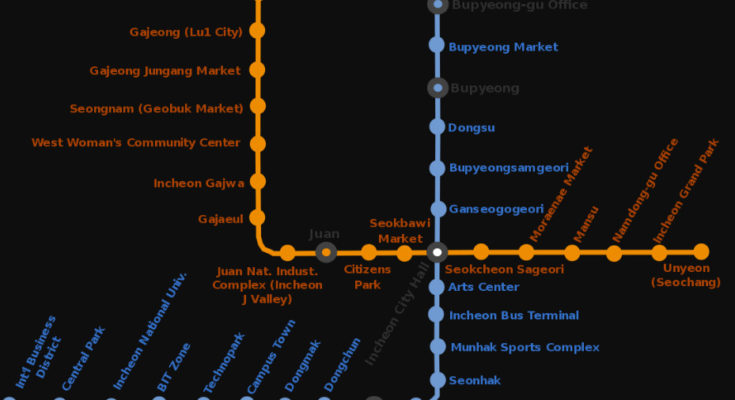 Incheon Subway is the rapid transit in the Korean city with the very same name. It is currently a single line metro system transporting 199,527 riders per day. The track is 29.4 km long and it connects 29 stations from the north to the south of the city. Incheon was one of the first cities in South Korea ( after Daegu, Busan and Seoul) to have a metro system.

Incheon is the third largest city in South Korea in terms of population. Due to its strategic location near the coastlines, since long it is regarded as the center of industrialization of Korea. Besides, tourists from around the world come here to visit the historical sites of the city. It is easy to understand, why the need for a rapid transit system in the city was inevitable.

Three Seoul Subway lines were operating already to connect the east-west side but there was a lack of such facilities in the north-south axis. As a result, Incheon subway Line 1 was planned. It took almost six years to complete the whole project and the first trial operation started in March 1999. The metro service is active Since October 1999 between Bakchon and Dongmak. In December 1999, the line was extended towards the north from Bakchon to Gyulhyeon. In 2007 and 2009 subsequent extensions took place finally connecting Gyeyang to International Business district.

Incheon Transit Corporation (ITC) operates the Line 1. Four stations (Bupyeong-gu Office Station, Bupyeong, Gyeyang and Woninjae) on the line connect to the lines of Seoul system. Bupyeong is the busiest station on the line. A full metro journey takes around 55 minutes of time. Except between Backhon and Gyuhyeon, the line is mostly underground. The main stations on this line are

Incheon Subway Line 2 is planned to be operational from July 2016. It will have a 29.3 km long track connecting 27 stations. The trains will run from Oryu dong station in Seo-gu district to Incheon Grand Park. It will intersect Incheon Subway Line 1, Korail Line 1 and AREX at different stations.

The trains will be driverless, operated using a highly sophisticated digital signaling train control system. ITC is also in charge of this line. A small section of the line lies above the ground but mostly it is underground. Main stations on this line are

The metro system operates from 5:30 AM to midnight, local time. Trains are available every 8 or 9 minutes, summing up to 7 trains per hour. During peak hours, trains run every 4 or 5 minutes.

Initially, Incheon Subway had a separate ticketing system but now it is integrated into Seoul system and this makes interchange even more easy. The fare system is unified implying that the tickets of Incheon Subway can also be used to ride the buses and metros of Incheon, Seoul and Gyeonggi-do.

However, some restrictions apply in the case of U Line, Ever Line and Shinbundang Line. There is an extra cost in these lines, a passenger should pay 300, 200 and 900 won respectively. On Shinbundang Line, if a rider travels beyond Jeongja Station, he must pay another extra fare of 300 won. Frequent travelers between Pangyo and Dongcheon/Suji-gu Office Station are eligible for a discount on the fare amount.

The fare payment can be made using T-money smart card. This card can also be used for payments in retail and convenience stores. It is to be purchased from station ticket machines or from outside stores. Alternatively, you can use your Android Smartphone or credit or debit card with RFID technology to pay for the fares.

You can buy either single-use or multiple-use traffic card. To buy the single use ticket, you need to deposit 500 won in addition to the fare price. This deposit amount is refunded when you return the card.

For teenagers between 13 to 19 years, the basic fare is 720 won. They pay only a discounted amount of the adult fare. In the case of single-use tickets, however, there is no discrimination between adult and teenager tickets.

For younger children between 6 to 12 years, the fare starts from 450 won with discounts on extra mileage price.

Incheon Subway system is well-planned and is equipped with the latest technologies to offer best riding experience.

In order to ensure a pleasurable journey for themselves and other riders, ICT requests passengers to follow the subway rules.

To make the best use of Incheon Subway service, remember the following points: