Genoa, the “Superba”, has a modest but efficient light rail system. It consists of a single line that connects the city center with Rivarolo Ligure suburbs to the northwest of downtown. The city has a population of 800,000 inhabitants. This system is managed by the AMT transport agency that is also responsible for all public transport in the city (bus, train, metro, funicular and lifts). It opened on June 13, 1990 on the occasion of the World Cup Italia 90.

Each year 11 million people use the Metropolitana di Genova that is the Genoa Metro italian name.

The Genoa Metro has low frequency and few hours of service but is still a good option for tourists. Almost all stations are near a site of interest, either commercial or cultural areas or any kind of attraction. Furthermore AMT is a well integrated system so that changing from metro to bus, to tram or whatever is quite easy and tickets are valid for the entire network except Volabus and Navebus.

It is a 7kms long line serving eight stations. The terminals are Brin and Brignole. From the subway there is direct connection with Trenitalia. The first section of this line was opened in 1990 between Dinegro and Brin stations separated by only 3 kilometers. The occasion for the opening was the great amount of people visiting this area as Italy celebrated the Football World Cup that year. All stations are underground, except Brin that goes elevated and Brignole at surface level. The line was expanded gradually until 2012 to Brignole. Stations: Brin, Dinegro, Principe, Darsena, San Giorgio, Sarzano / Sant’Agostino, De Ferrari, Brignole. The time to do the full trip is 15 minutes.

It costs € 1.50. The ticket is valid for 100 minutes on the whole AMT network except in the Navebus and Volabus.

Is the same as the previous ticktet but you can also use the second class Trenitalia train service. The price is € 1.60.

You can travel for 60 minutes around the AMT network (excluding Volabus) and also the Navebus. The price is € 1.60. This ticket is reserved exclusively for the Genoese citizens.

Best suited for tourists. It costs € 4.50. With this pass you can travel unlimited around the AMT network (excluding Navebus and Volabus) for 24 hours.

It costs 9.00. Valid for 4 people. It is valid for 24 hours after validation. Valid in the AMT network (except Navebus and Volabus) and second class of Trenitalia. It is interesting because for the price of 2 people you can get 4. 5 24hours tickets cost € 18.00.

It costs € 6.00. It’s valid for a trip in Volabus and 60 minutes of travelling in the AMT network (metro, bus, funicular)

Buying a ticket via SMS is simple: before boarding, simply send an SMS with the text AMT to the number 4850209.

Between 40 and 360 euros. So you better have a valid ticket.

All fares information in its official website (in italian).

Hours and frequency of service

The Genoa Metro operates from 6:00 to 21:00.
During the week the frequency at rush hour (7-9 am) is 6 minutes and 7 minutes the rest of the time.
Saturday, frequency is 7 minutes during rush hour and up to 11 minutes in regular hours. Holidays, metro starts operating at 7:00 am and runs every 8-15 minutes. The stations are open until 21:15 for all the users have time to leave. 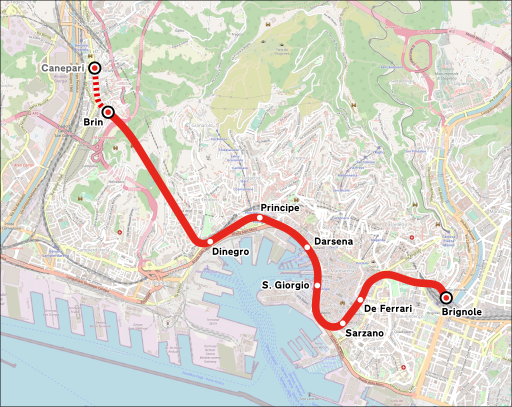 Genoa International Airport is about 6 km from the center. There is no subway service but a shuttle that runs every 30 minutes from the airport and has a journey time of 30 minutes. It costs € 6.

In the historic center of Genoa you can only walk, as the streets are so narrow that cars do not fit.

Every metro stations has been built taking into account the removal of architectural barriers. There are elevators and dedicated access to vehicles in all stations. There also are mini ramps to access trains.