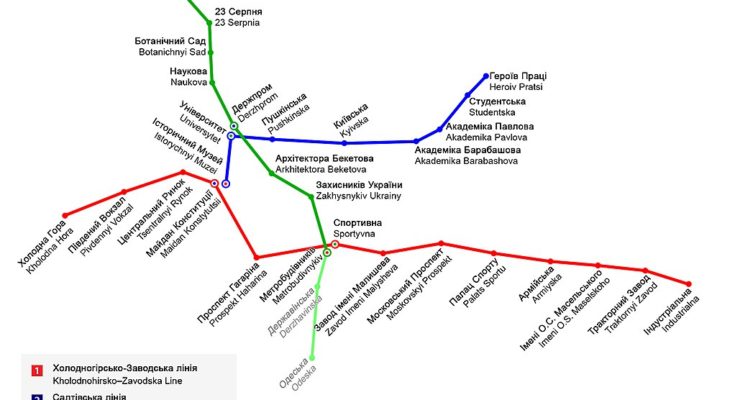 Kharkov is the second largest city in Ukraine with a population of nearly two million inhabitants. It’s not strange that such an important city has its own metro system. Kharkov metro is actually the second network built and put into operation in Ukraine, just after Kiev.

It was after the World War II that the idea of ​​building a metro system turn into necessary, specially due to the increase in population as a consequence of war. The plans were developed in 1968 with the ambitious project to build a hybrid system. However, several changes occurred in the first years of its construction, which were mainly financial. So seven years later, on 23 August 1975, the first line was inaugurated, scoring the Kharkiv Metro as one of six public transport networks of the former USSR.

Today, after more than 40 years of service, the Kharkiv Metro offers fast and accessible transportation across the city over a length of approximately 38 kilometers of tracks, divided into three lines that serve 29 stations. The system also connects to three railway stations and three major bus stations. Kharkov metro is daily used by about a million passengers and more than 200 million annually.

The metro is pretty easy to use. Just select your final destination while entering the subway. If you have any problem there is police personal to assist riders if necessary. In addition to being a quick and easy way to travel, the Kharkiv Metro is also very safe. However, as in any big city, it’s obvious that it is better to be careful and keep your property close when the service is very busy.

The Kharkiv Metro has three lines designated by a color. The 3 lines form a triangle in the city center, which was a recurrent layout in the former countries of the USSR.

The first line opened was Kholodnohirsko Line, the Red Line, formerly known as Sverdlovsko-Zavodskaya. It has been operating since 1975 and has a total length of 17.3 kilometers and 13 stations. It travels between the Kholodna Gora and Proletarska stations.

The second line started its operations in 1984, was the Saltivska line or blue line. It runs on 10.4 kms of track and serves 8 stations, Heroïv Ptratsi to Istorytchnyï Mouzeï. His name is expected to change in future years to Line-Saltovsko Schevchenkovskaya.

The third line was inaugurated in 1995 under the name Oleksiïvska Line, also known as the Green Line. It runs over a distance of 11.9 kilometers, serving eight stations, Metroboudivnykiv imeni H.I. Vachtchenka to Oleksiïvska. It connects residential areas north of the city center to the industrial and residential areas of the south. It also plans to change its name to the line-Alekseyevsko Gagarinskaya.

The Oleksiivska line is now extended to the northto Peremohy Prospekt. It is also planned to be extended to the south. According to plans, the transit system will add 50 kilometers of tracks to its current length and more than 30 stations.

To use the system, the user must purchase a token, which looks like a piece of paper now. It is available over the desks located at the entrance of the stations. The token is valid a single journey through the underground network, regardless of the distance traveled, the journey time or line transfers. To access the boarding platforms, insert the token into the turnstile. It is important to note that it is essential to place the token and walk in the right direction, otherwise there is a risk of getting hit by metal grid.

There are also rechargeable cards available in three options: 10, 25 or 100 passages.

The Kharkiv Metro operates from 5h30 to 24h.

The frequency of services for the red and blue lines is 2 to 3 minutes during the day and 3 to 4 minutes after 22 h. For the green Line is 3 to 4 minutes.

Due to the rough terrain of Kharkiv, subway stations are built at different depths. Most are relatively near the surface, about twenty meters, but six are much deeper. Those are primarily located in the city center.

Although it is said that the Kharkiv Metro is not as beautiful as that of Moscow or St. Petersburg that, the stations still are impressive.

The average distance between stations is 1.5 km. This short distance affects the speed of traveling of the train, which is 42 km/h.

Saltivska line crosses the river Kharkiv through a covered bridge with a length of 988 meters. 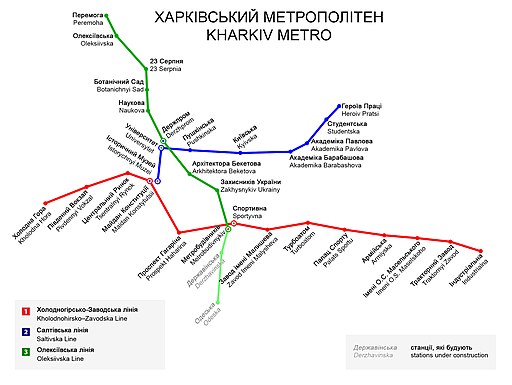