Known as Киевское метро, is the third metro that was built in the USSR after the Moscow and Leningrad. This metro transports 1400.000 travelers daily (more than 40% of the population) and in 2010 exceeded 500 million passengers a year. It is operated by Kyivskyi Metropoliten and its first line was opened in n 1960.

The city of Kiev, has a large number of public transport among which are: the Kiev Metro, which has three lines, two of which cross the Dnieper River by sky bridge, trolley buses and trams.

Currently there are 3 lines, a fourth one under construction, and a fith one in project., making a total of 66.18 km of tracks, (7.9 kms underground) and 51 stations.

The three lines are connected by underground passageways that allow passengers to change lines without leaving the metro, and therefore having to pay again. Transfers can be made at the following stations:

Depends on the line, but in general, every two minutes during rush hour, every 5 minutes the rest of the day and every ten minutes at night. 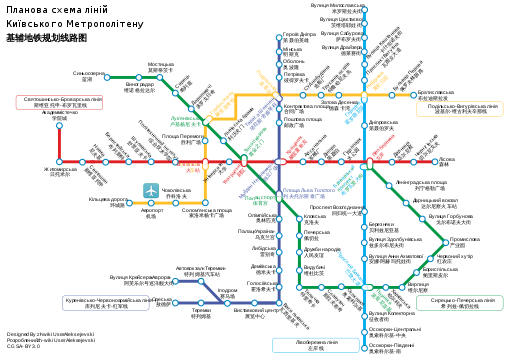 The Kiev Metro works very well and is very affordable, a journey between any two stations, including transfers between lines costs 2 hryvna, about 20 cents. Tickets are some plastic chips called "Zheton" which can be purchased over the counter sales in the lobbies of the stations (look out the window with the word Kasy.) Can also be purchased at orange machines located in the stations.

Price of some tickets:

There are two airports in Kiev, Boryspil (KBP) and Zhulyany (IEV), but the one that receives the most international flights is the Boryspil (KBP). It is situated 40 km southeast of the city center.

For a budget travellers there is also a Shuttle Bus (big one, or a mini van, depends on the time of the day) that you can catch very easily right out the front terminal door off to the right. You can’t miss it. It runs approximately every 15-20 minutes during a day and 50 mins at night. Vehicles will have “Boryspil” , "Polit" or "Atass" written on the side. The bus services operate 24hours a day, 7 days a week. You can take it with your bags for about 20 Hryvnia (approx. $4) to/from the first Metro Station "Kharkivs’ka" or for 25 Hryvnia (approx. $5) to Kiev’s Southern Railway Station Terminal. Road time is approx. 50 mins.