The Lima Metro is an urban transportation system that runs from its southern end to the vicinity of its historical center on a very important route for Lima’s population, but that does not pass too close to the most frequented points for the visitors of the city .

The current Lima Metro (Line 1) operates under an elevated viaduct system, but the following four projected lines will be underground. Construction began in 1986 and Line 1 crossed three districts of the southern end of the city: Villa El Salvador, Villa Maria del Triunfo and San Juan de Miraflores. Due to economic and social causes its construction was paralyzed until 2009, when it was resumed, getting launched in July 2011 with the adding of another six districts: Santiago de Surco, Surquillo, San Borja, San Luis, La Victoria and Cercado de Lima.

The Lima Metro network currently consists of only one line with sixteen stations.

Line 1 extends (since early 2012) along 21.48 km starting its route in the Industrial Park of Villa El Salvador at the south of the city, until the Intermodal Station Miguel Grau, in the district of Lima.

There are four other planned lines and the extension of section 2 of the Line 1 (currently under implementation), which considers the construction of 10 new stations, reaching 26 stations and 35 km of tracks, then it will be the longest elevated viaduct in the world.

Regarding the future Line 2, the first section of Line 2 of the system will be operational in 2016. The route features will enable this line to interconnect with the existing Line 1 at Station Grau and the first line of The Metropolitan, (a bus network that use exclusive lanes) in its Central Station. Additionally it is planned to build at the same time a branch that prolongs Line 2 to the International Airport and this will be the first stage of the future Line 4.

Line 3, is scheduled to run from Callao to La Molina. 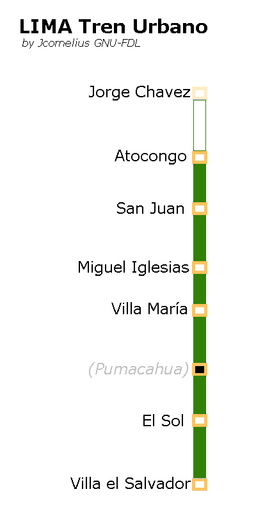 Monday to Sunday and holidays from 06:00 a.m to 22:00. For more information on schedules of each subway station visit the website of the Lima Metro: http://www.lineauno.pe/horarios.php

The Line 1 system has FLAT RATE for its entire metro network, this means that there is only one price to get to any destination

Passage Card is a reloadable card that serves as means of payment on Line 1. The card costs S / 5 and can be recharged at any station, trought vending machines nor selling counter.

Lima International Airport "Jorge Chavez" is at a distance of 19 kms northwest of downtown Lima.

You can not access to the airport by train. Regarding the bus, there are not bus stations near the terminal neither buses enter the airport installations. You need to walk to the bus stop located on Elmer Avenue Faucet to get a bus to reach the city. The minibuses (combis) also have their stop in the same Avenue and have their stops in the main streets of Lima (Abancay Avenue, Avenida Tacna and Wilson Avenue).

The most recommended in this case is the taxi. Hiring Counters are at the arrivals exit. There are three official companies: CMV, Mitsoo and Green Taxis (Taxis Verdes). The fare must be negotiated before entering the taxi because taxis do not have taximeters. If you request one by phone, when making the reservation. The journey from the airport to the city center costs around S/45 ($ 17). Taxis outside the airport are cheaper but are not recommended for security issues.