Even though Buffalo is the second most populated city in New York, it’s public transport system is really simple
consisting in just one line, if we compare it to other populated cities in New York such as New York City.
The Buffalo Metro Rail is operated by The Niagara Frontier Transportation Authority (NFTA), created in 1950.

The Buffalo Metro Rail is ran and operated by The NFTA, Niagara Frontier Transportation Authority. It is the transit rail system that operates all of Buffalo, New York rail systems. It had begun construction in 1979, but the system first opened in 1984 and was completed in 1986.

The original planning of the rail system was to be extensive and spread through all the city and suburbs, however, with declining population, there was no funding to continue the rails into the urban areas.

Since 1996, ridership has declined steadily by 1,074,423 riders by 2011. The length of the network is 6.4 miles, it starts at the University of Buffalo and ends at the Erie Canal Harbor Station in downtown Buffalo. The maximum speed of the trains are 15 mph on the above ground sections of the lines.

The Buffalo Metro Rail consist in a single 10,3 kms (6.4mi) long light rail system line that extends from Erie Canal Harbor in
downtown Buffalo to the University Heights district, about the length of Main Street. The downtown section of the line is free
and goes ground level. North of Theater Station, at the northern end of downtown, the line goes underground until University Heights.
A complete trip takes about 22 minutes. The network includes eight underground stations and five that are above ground. 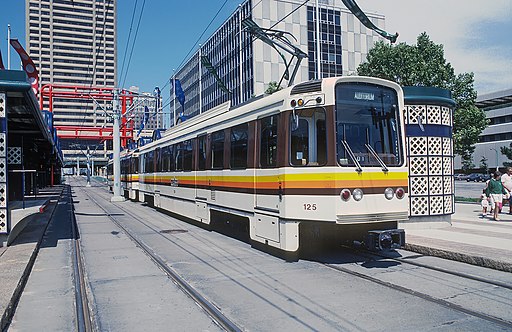 Formerly named South Campus, is located near the intersection of Main Street and Niagara Falls Boulevard near the University of Buffalo South Campus. It is an underground station and is in the paid fare zone.

LaSalle Station is an underground station located at the corner of Main Street and LaSalle Ave. It is part of the paid fare zone.

Amherst Street is located on Main Street and Amherst Street and is an underground station. This is in the paid fare zone. It is one of four stations that makes passengers stand curbside for buses.

Humboldt-Hospital Station is located at Kensington Ave. and Main Street. It is located in the western terminus. This station is underground and part of the paid fare zone. It is one of four stations that does not offer the off-road bus loop, and has its passengers wait curbside for bus pickup.

Delavan/Canisius College Station, formerly known as Delavan-College, is an underground station located at Main Street and East Delavan Ave. It is known for having one of the longest escalators in the country. It is part of the paid fare zone.

Utica Station is located on the corner of East Utica Street and Main Street. It is underground, and one of the fancier-looking stations. It is part of the paid fare zone.

Summer-Best Station has beautiful architecture inside and is located at the junction of Summer Street, Main Street, and Best Street. It is an underground station that is on the paid fare zone.

Allen/Medical Campus Station, formerly known as Allen-Hospital, is on Main Street and Allen Street. It is an underground station that offers free fare for inbound passengers, and paid fare for outbound passengers.

Theater Station was located on Main Street right between Chippewa and Tupper Street, however, this station is no longer active. It was permanently closed and demolished as part of the plan to reintroduce traffic to Main Street in 2008. After 10,359 days of service, the station was closed on February 18, 2013.

Fountain Plaza Station, formerly named Huron, is located on Main Street between Chippewa and Huron Street. It is an above ground station that offers paid fare for outbound passengers and free fare for inbound passengers.

Church Station is located on Main Street, just North of Church Street. This station is the closest to the Buffalo Metropolitan Transportation Center. It is an above ground station that is located in the free fare zone.

Seneca Station is located between Seneca and Swan Street on Main Street. It is an above ground station that offers free fare rides.

Erie Canal Harbor Station, formerly known as Auditorium, is the end, or beginning of the free fare zone. It is an above ground station located on Main Street just north of Scott and Hanover Street.

As for frequency, the trains show up quite frequently. Anywhere from 12 to 30 minutes depending on the stations and the times you are riding. Late at night and early morning, there are fewer trains running, while at peak hours there are more trains. But as a rule of thumb: Monday to Saturday frecuency is 12 – 15 minutes. On Sundays and Holidays there is a train every 20 minutes.

On the above-ground trains, you can ride completely free of charge. Underground is where you have to pay for your rides. Make sure to pay for your ticket before you get on your train, as you will need it to show proof of your purchase to a Metro attendant.

Reduced fares are for children 5-11 years old, and people older than 65,
disabled people and people with special medical care.

Parking in the Metro

There are many places you can park and ride along the metro rail line. Just some of the places include:

You can even park and ride at the transit stations including:

Connection to the airport

Buffalo Niagara International Airport (BUF) is located in Cheektowaga, New York. Whether you are arriving or going, the metro bus the best option for you. You have two options to choose from:

Paratransit is available on buses and trains. Any passenger with special needs will feel safe and comfortable with the metro bus and rail equipped to help them during their rides.