Nizhny Novgorod, formerly known as Gorky (1932 – 1991) is one of the largest Russian cities. It has 1.25 million inhabitants. It is located 400 kilometers from Moscow at the confluence of the Volga and Oka rivers. It has a rapid transit system that was also known as Gorky Metro. It started operations in 1985. It has 18.8 kilometers and 14 stations in its route. All stations are underground except Burevestnik Station, although their initial design was at surface level.

Because of its geographical location its design does not correspond to the typical design of russian metro systems, which form a triangle with their lines intersecting at the center of the city.

Also known as Avtozavodskaya or line 1. It has a total length of 15.1 kms and serves 11 stations. This line has been operational since November 1985. The latest update of this line was the opening of a station in November 2012. The time required to complete a full trip is 18 minutes. Avtozavodskaya line stations: Gorkovskaya, Moskovskaya, Chkalovskaya, Leninskaya, Zarechnaya, Dvigatel Revolyutsii, Proletarskaya, Avtozavodksya, Komsomolskaya, Kirovskaya, Park Kultury.

Also known as Sormovskaya line or line 2. This line is much shorter than the red line. It only is 3.8 kilometers long and serves 4 stations. It opened in 1985 and the last time it was updated was in September 2002. The total travel time is 8 minutes. Sormovskaya line stations: Moskovskaya, Kanavinskaya, Burnakovskaya, Burevestnik.

It will be the line 3. At the moment it is only projected. 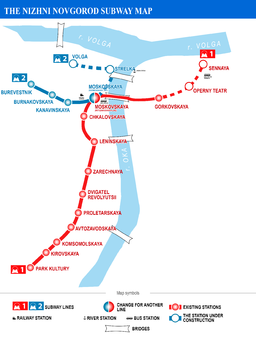 It is expected that the decision to allow deer in the metro boost its utilization.

Nizhny Novgorod metro is criticized for having a low utilization. The system had 109,500 passengers daily in 2013.

As happened with other systems of the former Soviet Union, the pace of building was impressive until the dissolution of the USSR, then everything fell in a great economic depression, and there was no funds to complete any project.