Sao Paulo’s subway has 5 lines ( blue, green, red, yellow and purple ). Blue line was the first one that started operating in 1974. It has a total of 58 stacions, 3 transfer stations and
22 have connections with urban buses. Total extension of the network is 65,3 Kms.

Sao Paulo’s metro network has 900 cars. 672 are working in rush hours. Average interval between trains is 141 seconds. Maximum speed is 100 KM/H while the average speed is 37,5 KM/H 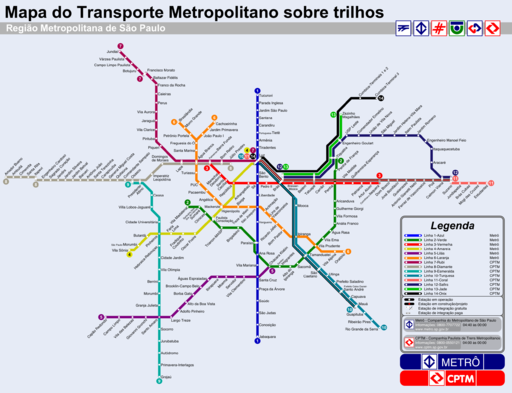 You can check the exact schedule on itsweb

Sao Paulo’s underground has a real time monitoring system where you can check for failures or down times in all the stations.
It is known as “Directo do Metrô” (Direct from the underground). You can download it from
its web site for iPad and for smartphones or you may also use a widget for pc.

This metro system also promote the use of ecological transport by intregrating the use of the bicycle almost all along the network.
Though it is not available yet in all the stations. You can find updated information about what lines fully permit the transport of the bicycle and wich ones are conected with bike lanes in this document.

Sao Paulo’s metro system network official site is very complete. You can use a travel simulator
to plan your trip.