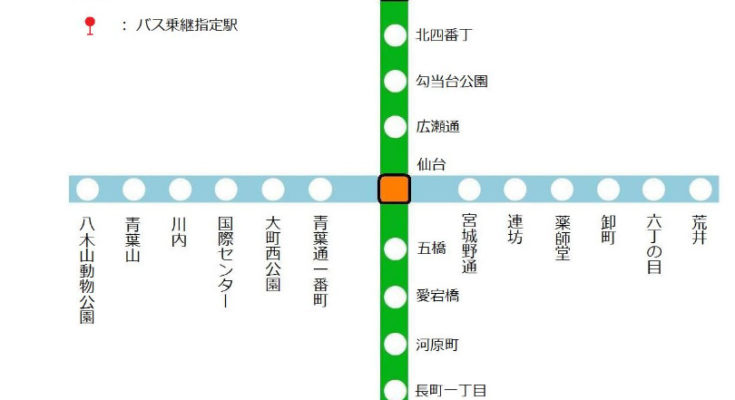 The Sendai Subway is the Metro system operating in this city, part of Miyagi district in Japan. It is administered by the City Transportation Bureau of Sendai. Sendai Subway connects Taihaku-ku central district to Izumi-Chuo district in the suburban area of Izumi-ku.

At the present moment there is only one line in operation since 1987, identified by the green color. It is the Namboku Line. This line circulates from Izumo-Chuo in the north of the city to Tomizawa, in the south. At the halfway point is Sendai station, 12 minutes from Tomizawa and 15 from Izumi-Chuo. The entire route takes about 28 minutes. This line covers an area of 14.8 kms of which 11,65km and 17 stations are underground. Stations: Tomizawa N17, N16 Nagamachi-Minami, Nagamachi N15, N14 Nagamachi-Itchome, Kawaramachi N13, N12 Atagobashi, Itsutsubashi N11, N10 Sendai Hirose-dori N09, N08 Kotodai-Koen Kita-Yobanchō N07, N06 Kita-Sendai, Dainohara N05, N04 Asahigaoka, Kuromatsu N03, N02 Yaotome, N01 Izumi-Chuo.

Hours of operation and frequency

Schedules are available in every station.

Tickets can be purchased at vending machines located next to the metro entrances. If you purchase a ticket for a shorter distance than the actually traveled, you can pay the difference at your destination, otherwise you could be fined.

If you plan to ride the metro frequently you should use SKIP or Joy pregago cards, as they are much cheaper than using single tickets each time. These cards can be purchased from vending machines at subway stations, in offices at bus stations, in any passenger office service, in the information center of Sendai Nishiguchi Bus Pool … Both the card and the SKIP SKIP/Joy can be used in Miyagi city buses, besides the subway. Prices range from ¥ 1000, ¥ 3000, and ¥ 5000.

Something to keep in mind is that if the card credit is near ¥ 200 it can not be used again until the credit is increased.

In Namboku line the “fuzzy logic” program is used to control the speed of the trains and their energy consumption. Developed by Hitachi, this technology makes the starts and stops of the convoys to be extremely soft, reducing by 10% its consumption compared to services operated manually. Off-peak hours, driving is human controlled, so drivers maintain their skills.

In March 2011 an earthquake severely affected the entire region, causing a subsequent tsunami, being one of its consequences the important damages to the Sendai Subway.

Foreign visitors are recommended to use this transport to travel around the city. All warnings signs are also in English. In that sense Sendai, Hirosedori and Kotodai Koen stations in the center are close to several attractions.