Oslo has a subway system with 6 lines and 100 stations that circulate throughout the city center. It’s length is 85 km. In addition it has a rail system called NSB and tram known as Trikken.

The first section of Oslo metro system was inaugurated in May 1966, with line 4, from Brynseng station to Jernbanetorget station.
The first rail began operating more than a century before, in 1854, and tram in 1875.
Oslo Metro is also known by the name of T-Bane.

Operated by Oslo T-banedrift through the municipal transport company Ruter.

Major stations: Oslo T-Bane Central Station is Helsfyr station, where lines 2, 3, 4 intersect and line 1 to Bergkrystallen in rush hours. Another important transfer station is Ullevål stadion, where lines 3, 4 and 6 intersect.

Places of interest along the route of the t-bane

The Oslo Center is very compact and easily explored by foot.
From the central district known as the Quadrilateral, you can get to several interesting areas.
This district is delimited by the Akershus Castle, the Cathedral, and Skippergata Vollgate Øvre.

In the west side is the Bygdøy peninsula, with several museums, which can be reached
by bus or boat from Akker Brygge.

In the northwest side is the district of Majorstua and Vigeland Park (or sculpture park).

In the southwest side is the modern area of ​​Aker Brygge, next to the harbor, perfect for shopping and enjoying nightlife.

Finally, in the East side you can visit the Munch Museum in Tøyen, and Grønland multicultural neighborhood. Grünerløkka, quintessential artistic area is northeast of downtown.

T-bane is integrated into the public transport system in Oslo and Akershus through the Ruter agency.
Tickets are valid in tram, bus network in the city, ferries and commuter trains in Oslo, operated by Norges Statsbaner.
Since 2011 a single ticket for one zone (entire metro network is in Zone 1) costs 36 NOK (or 25 if purchased in advance), 590 NOK monthly passes.
This includes all kinds of public transport within the area for which you have the ticket.
For the subway, only Zone 1.

Tickets can be purchased at vending machines that are located throughout the city,
post offices and tourist offices. Tickets for bus, tram and metro access must be purchased
prior to transport. In some cases you can buy on board but the price is higher.
The fines for traveling without a ticket are very high, 750 to 900 NOK for traveling
without a valid ticket.

The Oslo Card will give unlimited public transportation by subway, bus, trams, and ferries to
the islands in the Oslo Fjord and discounts and free admission to many museums.
For a listing of the places included in the offer “Oslo Pass”, check the list of museums and
discounts on: http://www.partner.viator.com/.

Valid for 24, 48 or 72 hours. The validity period of Oslo card begins with its first use.
The Oslo Pass card for children (4-15 years) and seniors (from 67 years) have reduced price.
When the card comes with a brochure that lists and explains the services to which you have
access. It can be purchased at the tourist offices and hotels.

Oslo Airport, Gardermoen is 45 km from the city. The fastest way to get there is by using the Flytoget, a shuttle train
that takes just twenty minutes from downtown. The price of a single ticket is 170 NOK, and runs
from 05:35 am to 12:35 am every ten minutes. If there is no hurry, a cheaper option is to take
the train NSB (Norwegian State Railway), which takes between 30 and 40 minutes and costs 103 NOK.

Flybussen SAS buses also go to the airport and it takes about 50 minutes to make the journey
.Price for the single ticket is 140 NOK, and 240 NOK for the return ticket. 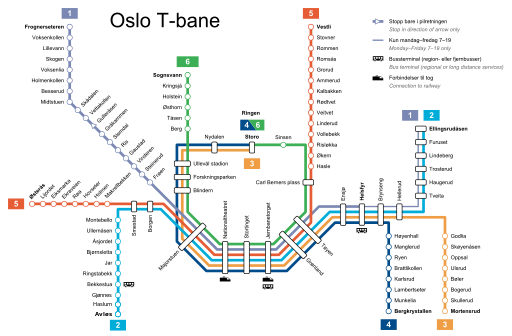