Chicago has a Metro system (subway metro – Metro Chicago) supplemented by a commuter rail system. It is popularly known as the Chicago ‘L’ (for Elevated) and is operated by the Chicago Transit Authority (CTA).

Chicago has a Metro system (subway metro – Metro Chicago) supplemented by a commuter rail system. It is popularly known as the Chicago ‘L’ (for Elevated) and is operated by the Chicago Transit Authority (CTA).

The current system comes originally from a rapid transit system on surface, which opened in 1892, and today, it is the third busiest U.S. Metro and the second oldest behind New York.

The metro system consists of 8 lines that come together in a ring called Loop (historically Union Loop) located in the center of the city where it is possible to combine five of the eight lines (brown, green, pink, purple and orange).

Of the remaining three, the Blue Line and Red Line operate underground under the loop, connecting with the stations of the Loop, and the Yellow line, neither connect nor passes through the Loop. The Loop (circuit) is named so because it ciculates in a rectangular shape around Lake Street on the north, Wabash Avenue on the east, Van Buren Street on the south, west and Wells Street.

Currently there are several extensions on study: 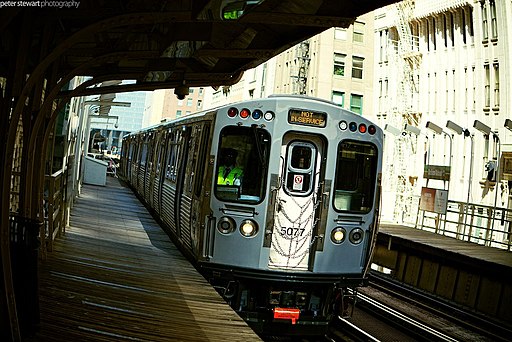 Varies from 2.5 minutes during peak hours to 15 minutes at night.

You can buy your passes online from the CTA store, from vending machines at certain train stations, or at retail locations around town.

The city of Chicago has two airports: O’Hare International Airport and Chicago Midway.

The Chicago O’Hare International Airport is 32 km northwest of downtown Chicago and is one of the world’s busiest airports.

CTA Blue Line provides direct service to the airport. Access to the station through a pedestrian tunnel from Terminals 1, 2 and 3. The trip between the airport and downtown Chicago takes about 45 minutes and costs just 2.00$.

The blue line runs 24 hours and all trains leaving from the airport arrive to the city center.Also the city center is accessible by bus. The Continental Airport Express buses depart every 5-10 minutes from O’Hare. The trip to downtown Chicago costs about $ 17.50. Tickets can be purchased at kiosks next to the International Terminal and at lower levels of Terminals 1, 2 and 3.

The Midway Orange Line train station is located near the terminal building, there you can buy the ticket at a cost of 2.25$ or a 1 day card for unlimited travel to 5.75$ .The Orange line arrives to the center of the city in just 25 minutes.The service operates all day, except from 01:00 a.m to 04:00 am or from 23:00 on Sundays. There is a night bus available, the N62 bus Archer.

Transfers between O’Hare and Midway Airport.

The service given by Omega Airport Shuttle. It is convenient and cheap to do the transfer between the two Chicago airports, O’Hare and Midway. The cost of the trip is $ 17.00.

Buses depart from Midway to O’Hare International Airport every hour from 07:00 a.m to 8:00 p.m.